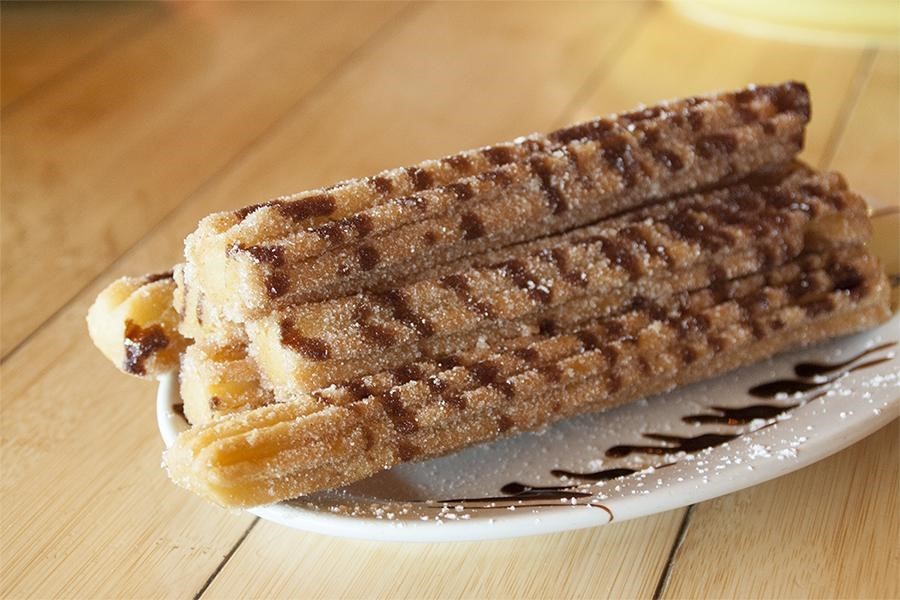 Warm, fluffy but with crisp ridges, sugar-sweet, with a little kick of cinnamon. Churros are an absolute delight. Just don’t call them doughnuts! In this month’s blog, we’re going to explore where churros come from, why they taste so good, and where you can get them.

To say that tracking down the origin point of Churros was difficult is an understatement. Fried foods have been around for as long as one can imagine. So it is easy to confuse the churros origins. Some would argue that the Spanish churro is a descendant of a Chinese pastry; called youtiao. This Chinese pastry is fried in oil and looks a lot like two long breadsticks stuck together. But you won’t find any sugar or chocolate as you see in other countries. You will, however, notice a similar star-edged shape and sweetness of the dough when compared to the pastry so popular in Spain and the Americas. Of course, both of these are very different than the “flour and water fritter” found in 1st Century A.D. Roman cookbooks and that recipe is just as different as the one found in Ancient Greek texts. It is pretty safe to assume that churros have been around an extremely long time even in a simplistic form.

Churros can also be found in France, Portugal, the Philipines, Mexico, Cuba, Brazil, and of course in the U.S. Each culture has its own style of churro. Now might be a good time to define what a churro truly is. A churro is a type of fried dough that is typically served hot with some form of sweet topping or filling. For example, the traditional Spanish churro is served with cinnamon and sugar sprinkled on top. But you can find them filled with fruits like guava in countries like Cuba, filled with chocolate in Brazil, or topped with sweetened condensed milk in Colombia.

To make a churro, you make a dough from a mixture of flour, water, and salt. Many recipes also contain butter, milk, or eggs. The star-shaped churros that we know and love are extruded through a star-shaped nozzle. The Chinese version is pulled through rather than pushed. It seems like each culture has its own subtleties. One thing they all have in common is they are fried in oil and served warm.

So, it looks like a doughnut, it is cooked like a doughnut, and the recipe is almost the same as a doughnut… Why can’t we call them doughnuts? Because shapes matter, that’s why! Pizza and Calzones; Same ingredients, different format. A taco isn’t a burrito. A hotdog is not a sandwich. So if you want to get super technical, a churro is more similar to a French eclair than a doughnut. We are just going to have to agree that shapes matter; a churro is only a churro.

You might be wondering why they taste so good. Well, that part is easy. When the churro comes out of the fryer, it is immediately dropped into a cinnamon and sugar bath and evenly coated to give it the sweet flavor we all enjoy. But wait, what about the chocolate? Where did that come from you ask? We have the Spanish inquisition to thank for that. The conquistadores brought cacao back to Spain from South America. They sweetened the cacao with sugar cane, and then it went on everything. It became a common pairing with churros almost immediately. As a matter of fact, in 1894, a restaurant called Chocolateria San Gines opened in Madrid to serve what we know as hot chocolate and churros. Even today, San Gines is open 24-hours to get your “churros con chocolate” fix.

So now you want some churros? We at Nacho Hippo can help you out. We serve churros at both our North Beach Blvd and Market Common locations. We serve them hot and fresh, with plenty of cinnamon and sugar and drizzled with just enough chocolate to make your mouth water when you see them, but no too much to leave you a mess when you are finished with them. We do recommend that you share with a friend.